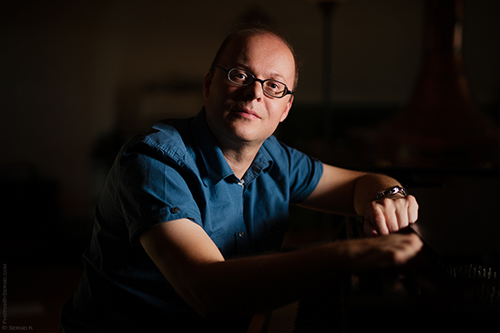 Dr. Igor Karača is a Bosnian composer and pianist of classical and jazz music. Most of Karača's work has been for chamber ensembles and electronic media. He employs a wide variety of techniques, ranging from controlled aleatoric, avant-jazz inspired textures, to more traditional, neoclassical style; he usually aims to make his work accessible to a relatively large audience.

After taking private music lessons, Karača studied music at the Academy of Music in Sarajevo under Josip Magdić and Anđelka Bego-Šimunić. He graduated in 1996 with a BM in music composition, and has since been a guest at different masterclasses in Europe, working with Bogusław Schaeffer, Klaus Huber, Helmut Lachenmann, Marc-André Dalbavie, and Marco Stroppa, among others.

In 1999, Karača came to the United States to study composition with Dr. Thomas Wells at The Ohio State University, from which he received his DMA in 2005.

Igor Karača has written three symphonies, a suite for concert band, concertante works for clarinet and piano, thirty electronic and electro-acoustic compositions, over seventy chamber compositions, including the award-wining Wind Trio, Between Walls for violin, clarinet and piano, and Handful of Dust for bass clarinet and piano. Karača composed dramatic scores for three motion pictures: "A House Over the Rainbow", "Sarajevo War Diary" and "Tell Me Your Name Again", and three theater plays: "Twelfth Night", "Fate of a Cockroach" and "Requiem for Bird Parker".

Recent performances include premieres in the USA, Croatia, Serbia, Romania, and the Netherlands, and other performances in Germany, Ireland, France, Austria, Poland, Sweden, Switzerland, and Bosnia-Herzegovina.

He was also a member of Sarajevo Jazz Quartet, the jazz quintet Happy End, and Bosnian pop-rock band Punkt, for which he played piano, Hammond organ, and electronic keyboards.