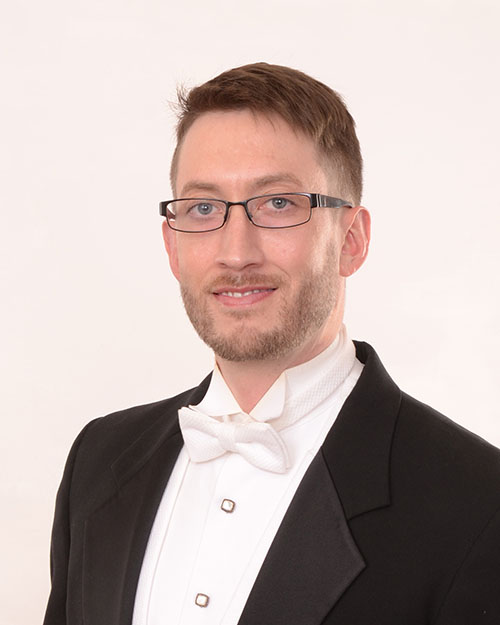 Dr. Christopher D. Haygood conducts the OSU University Singers; supervises Statesmen, the OSU men's choral ensemble; teaches undergraduate and graduate courses in Choral Studies and Choral Music Education; and is faculty advisor for the student chapter of ACDA. In addition to serving as a clinician across the country, Christopher is active locally as the director of Belle Voci, the grade 9-12 choral ensemble of the Stillwater Honor Choirs.

Christopher's research interests span from the choral music of holocaust survivor Petr Eben to the role of music in cultures of native peoples. Recently he spent time in New Zealand exploring music of the Maori tribes and plans an extension of this research with the tribes of Oklahoma. Christopher completed his Doctor of Musical Arts in Choral Music at the University of Southern California Thornton School of Music and completed additional fields in Vocal Arts, Sacred Music, and Instrumental Conducting. While at Thornton, Christopher was the assistant conductor of the world renowned USC Thornton Chamber Singers, conducted the marketing recording of Wipip! with the Chamber Singers for composer Sydney Guillaume, taught undergraduate and graduate conducting, and prepared choral groups for collaborations with Maestro Helmuth Rilling, Andrea Bocelli, Jennifer Hudson, and The Tonight Show.

In addition to his duties at USC, Christopher was the choral conductor of the Legal Voices of Los Angeles performing regularly in conjunction with the LA Lawyers Philharmonic in the Walt Disney Concert Hall and Shrine Auditorium. Christopher also taught conducting and choral methods at Loyola Marymount University, was a bass soloist with the Los Robles Master Chorale, and sang as bass soloist at Beverly Hills Presbyterian Church.

Prior to moving to Los Angeles, Christopher studied at Samford University, the University of Mississippi, and the University of Miami, and completed an honors course in Music and English at the University of Cambridge. He has conducted choirs across Europe and New Zealand and for master classes with Maestro Helmuth Rilling, Rodney Eichenberger, and Dale Warland. Christopher studied conducting with Jo-Michael Scheibe, Nick Strimple, Larry Livingston, and Jerry Jordan. As a secondary music educator, Christopher's choirs and ensembles consistently received highest honors across the country, and he was named the MEA Outstanding Young Music Educator in 2006.