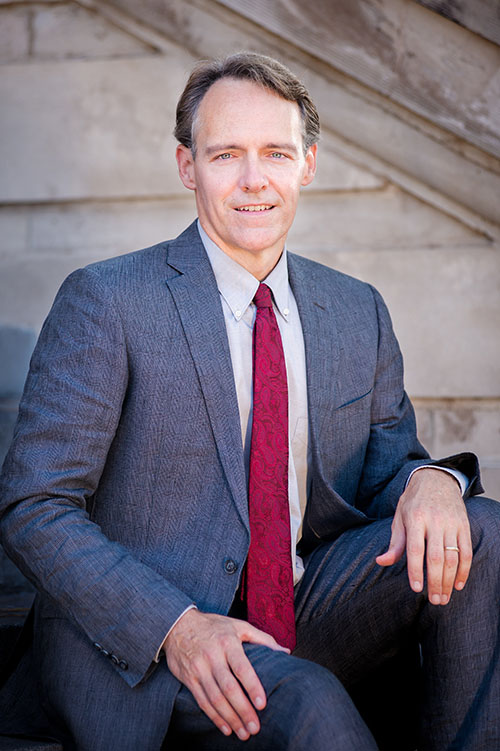 Thomas Lanners has appeared as a solo and collaborative pianist and clinician throughout the U.S. and abroad, presenting his New York solo debut in Weill Recital Hall at Carnegie Hall in 2004. His performances have been broadcast nationally and internationally on programs such as American Public Media’s Performance Today, BBC3 in London and RTÉ Radio 1’s Sunday Miscellany in Ireland, among many others. Designated the 2014 Distinguished Music Teacher by the Oklahoma Music Teachers Association, he currently serves as Professor of Piano at Oklahoma State University.

Thomas’ CD, Ned Rorem: The Three Piano Sonatas, was released by Centaur Records in 2007. Links to three tracks on the recording were included in an October 2018 article in the New York Times on the occasion of Rorem's 95th birthday. Mark Lehman, in an American Record Guide review, wrote of the Sonatas disc: “It’s especially pleasing to have all three of Rorem’s sonatas on one disc, superbly played by Thomas Lanners, and in clear, vivid sound. … Anyone who cares about mainstream 20th Century piano music should seek out this superlative recording.” In a review of his 2005 release, Touches of Bernstein: The Complete Published Piano Music of Leonard Bernstein, critic Jed Distler wrote for ClassicsToday.com: "Thomas Lanners totally understands this music, pointing up the jazzy qualities to idiomatic perfection as well as projecting Bernstein’s lyrical generosity without milking it … All told, Lanners' loving mastery easily holds its own in any company. Warmly recommended."

Lanners’ recording, Ned Rorem: Piano Works, Volume 2, was also released worldwide on the Centaur label. The disc received much critical praise, including the following from critic Donald Rosenberg’s review in the Cleveland Plain Dealer: “The piano pieces on this fine recording attest to Rorem’s penchant for lyrical and dramatic contrast. … Thomas Lanners brings exceptional detail and urgency to the repertoire, taking as much care with inner voices as he does with arching statements. Grade: A.” Robert Schulslaper wrote, in a Fanfare magazine review of both Rorem volumes: “Lanners plays [all the virtuoso pieces] to the hilt … and he’s also a sensitive musician who communicates the essence of Rorem’s varied moods.”

Thomas was awarded a grant in 2010, through the Centaur label, from the Aaron Copland Fund for Music Recording to record works of Pulitzer winner Ross Lee Finney, having also received a Copland grant for his first Rorem CD. His championing of American piano music was the topic of an interview article, titled “Pianist Thomas Lanners: Spreading the Good Word,” in a 2010 issue of Fanfare.

Always in demand as a clinician, he presented sessions at the 2019, 2009, 2005, and 2001 Music Teachers National Association conferences, and was featured in a Pedagogy Saturday panel session for the 2020 MTNA Virtual Conference. He served as the monthly MTNA Webinar clinician in February 2020. Thomas has also presented at the 2019, 2015, 2010, 2008, and 2000 Oklahoma Music Teachers Association conferences, conferences of the Texas MTA (2016 and 2012) and the College Music Society’s South Central Chapter. Lanners gave a lecture, for the seventh consecutive year, for the 2020 MusicEdConnect.com National Conference, a three-day online event in February that includes sessions from numerous respected piano pedagogues. He gave a lecture as one of three featured guests during the inaugural International Conference on Education, Culture and Arts (Congreso Internacional de Educación, Cultura y Artes) in Zacatecas, Mexico, and presented sessions at Eastman’s Summer Chamber Music Institute.

One of Dr. Lanners' former OSU students, Chul Hyung (Tony) Cho, joined the faculty of the Oberlin College Conservatory of Music in 2015 as an opera coach. Tony previously worked at the Juilliard School as an Associate Opera Coach, then coached operas at the University of Southern California’s Thornton School of Music and at Chapman University outside Los Angeles. Former student Christopher Reed recently completed the Doctor of Musical Arts degree in Collaborative Piano at the Eastman School, having earned his Master’s degree there as well. Other students have been accepted into graduate piano performance degree programs at Eastman, the Universities of Michigan, Indiana, Illinois, Southern California, Washington, Kansas, Missouri-Kansas City, the Manhattan School of Music and the Cincinnati College-Conservatory of Music. They have had success in numerous competitions, winning Oklahoma Music Teachers Association Collegiate competitions (including first place winners in 2019, 2018, 2016, 2013, 2012, 2011, 2010, 2006, 2005, and 2003, and numerous runners-up) and state wins in the MTNA Young Artist competitions (including a national finalist in the String Chamber Music category in 2013), MTNA Senior winners in 2019, 2018, 2010 and 2009, and MTNA Junior winners in 2016 and 2015. His students were named Alternate (Second Place) for the South Central Division in the Senior Artist category in 2020 and 2019, and in the Junior Artist in 2017.

"The Art of Teaching Master Classes: A Collaboration Between Teacher, Students and Audience", published in the October-November 2012 issue of American Music Teacher magazine

"With Our Eyes Closed", published in the April-May 2015 issue of the American Music Teacher magazine